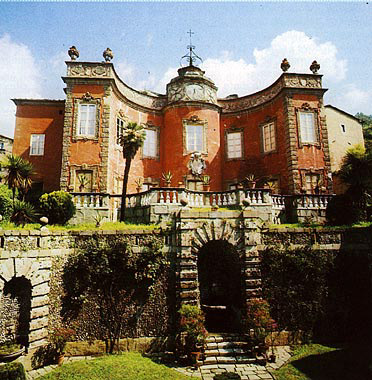 The palace of Villa Garzoni in Collodi is the biggest of the palaces in villa of the Lucchesia: its imposing and majestic façade stands out on the slope of the hill almost covering the village of Collodi which is reached by passing under the arch of the palace. In addition to its massive structure (there are four floors to this building as well as a raised central part) there are other elements which accentuate its grandiose character such as the flights of stairs, the Garzoni family's coat of arms with flag trophies placed above the door, and the place for the two guardsmen by its side.
The solemnity of the façade contrasts with the "Summer Palazzina" built by Juvarra creating a surprising scenic effect typical of baroque taste. As soon as you pass through the main door, the Palazzina presents itself with its light and curved lines, the bright chromatic effects achieved by the red plaster, the mosaics and the pebbled wall work.
The palace's interior is noteworthy for its decoration in stucco, and its frescos in perspective by Colonna. The main garden, situated to the left of the stream, is a first-class architectural realisation. A complex layout makes the most of a relatively limited space (150 metres long, 200 metres deep) on a steep slope. Several terraces have been built which are reached by flights of stairs. The highest part of the garden is divided in two by stairs with a central water fall. In the low part of the garden, there are flower beds "a parterre" and bassinfountains from the 1700's. The design of the stairs and mosaics on the walls of the terraces are of a severe late renaissance style, while the curved lines of the nymphaeum are more lively ( be it in plan and in mosaic decoration). Inside the garden there is a verdure theatre dating back to the second half of the 17th century, a labyrinth, the last remaining of its kind amongst the Lucchese villas, and a construction destined for bathing. The garden is dominated by the Statue of Fame that blows into a shell releasing a very high jet of water. The terracotta statues are noteworthy: some are replicas of Alexandrian or baroque statues while others portray figures taken from daily life (the water vendor, the peasant, statues of beggars and common people).

A design from 1633 testifies that in that period, the structure of Villa Garzoni was essentially the same as it is at present although the central part was incomplete. Infact a part of the second and third floor is missing in the design. The new construction included a precedent building which was smaller in size. The frescos on the first floor, cited in an ode by Francesco Sbarra, were completed in 1652. Belli Barsali has attributed this "Summer Palazzina" to Juvarra based on some designs of the façade.
The main garden to the left of the stream, was constructed between 1633 and 1652 (it is celebrated in the same ode by Sbarra, entitled Le Pompe di Collodi). During the biennium of 1786-87, some modifications were carried out by Ottaviano Diodati: a new plumbing system was put in, the huge Statue of Fame was realised in the high part of the garden, the low part of the garden was extended and the terracotta statues were added.