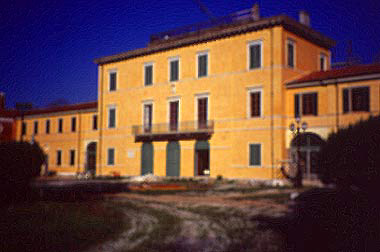 The villa is situated in the centre of the Borbone's estate which is also called archducal given that the Hapsburg Lorraine inherited it from the Borbones. It is surrounded by an enclosure with a monumental gate looking onto via dei Tigli.
The palace consists of a three floored central body which is close-packed and two wings spanning over two floors which flank it on the north and south sides. There are two perpendicular arms of equal height at the end of the wings; the north one includes the stalls and the mausoleum where the royal family of Lucca and her ancestors are buried while the southern arm hosts staff quarters and storerooms.
The composition of the façades reflect themes which are very dear to Lorenzo Nottolini (Segromigno 1797-Lucca 1851) and are also applied to the 19th century wing of the Palazzo of Lucca.
On the main façade, above the centrally positioned French window of the terrace which was added to this front during the mid 1800's, there is a coat-of-arms. It is made from Carrara marble and depicts the Borbon family emblem in the new forms wanted by the Duchess Maria Luisa of Lucca. The flower patterned Spanish crown sits on top of the coat-of-arms. Carlo Ludovico is responsible for this substituting of the original royal lilied crown.
The windows on this façade are framed with white marble cornices from Carrara and the hip roof of this main building is crowned with a terrace surrounded with cast iron railings from the mid 1800's.
The façade at the back of the villa is much more modest in its decoration. The openings are surrounded in plaster with the exception of the three French windows on the first floor which open onto a balcony certainly built at a later date during the 1900's. The cornices of these openings must also date to this period.
The windows on the ground floor have grills but seem quite modest as during a restructuring period around the mid 19th century, original ashlar and blind arches which gave an air of richness and power to this façade were removed.
Two large French windows closing the coach passage which are covered with vaults with a temper painted lacunar on both façades must be pointed out.
The 14th century style marble façade of the chapel, built in 1885, constitutes the west front of one of the two arms to the side of the main building, while the other has a central European style with northern shaped tripartite windows finished in brick. This one was also restructured at the end of the 1800's. This attraction to Austrian culture can also be noted inside the palace where some white and gold doors are reminiscent of the Hofburg of Vienna design; even the parquets covering the first and second floor follow the designs of northern and central European structures. Even though the building underwent continual and notable changes of hand since it was first constructed and throughout the 1800's, it presents itself as a calibrated and balanced palazzo, with the characteristics of a typical country residence.
Infact the villa never was an official residence: at first it was used as a hunting lodge and then as an owners house in farming estate. Finally it was used as a summer residence, with a kind of middle-class attitude.
Despite the large dimensions of the palace, there are no large halls. Instead there are small rooms with a typical middle-class air, where the family could spend their time far from the royal ceremonies and the Spanish etiquette dear to Queen Maria of Borbones.
The park hosts a one-floor extended lemon house structure, whose arched windows open onto the flower garden in front of the church.
The garden is organised with flower beds and is cheered up with the presence of a water pool and two marble statues. The statues were part of a group of four wanted by the Duchess Luisa Maria, wife of Duke Carlo IIIrd of Parma, to adorn the Piazza of the capital of the Duchy with. They portraied the saints Margherita, Roberto, Alice and Enrico, who bore the names of her four children. The statue of St. Robert is today found in the gardens of the Villa delle Pianore.
The rest of the garden conforms to the romantic style park featuring wide central avenues and little woods, pathways and clearings with seats. A semi-circular area surrounded by little woods marks the end of the estate at the back of the palace .

The structure started out as a hunting lodge in the great park that Queen Maria Lusia had commissioned to be built by the architect Lorenzo Nottolini to complete her royal palace in Viareggio. Her palace was situated on the Burlamacca canal and had been built by extending the already present nobile lucchese villa of Ferrante Cittadella.
Around the hunting lodge stables for rearing the "Reale Razza Favorita" (Royal Favourite Breed) , the Queen's most prestigious breed of racing horses, should have been built. Maria Luisa saw this project as a little part of a greater plan to enrichen the Royal Residence, celebrating the glory of the Borbons.
When the queen died, her son, Duke Carlo Ludovico of Lucca showed no interest in this project and simplified his mother's ambitious plan, instructing Nottolini to abandon monumental aims in the structure. It is therefore more Biedermeier in taste.
The project, re-scaled in such a way, should have originally developed over three separate structures. The central structure had two floors as well as a mezzanine , while the two L- shaped sides had one floor and a mezzanine. The central building was characterised by plaster ashalr work which covered all of the ground floor framing the front door and the three blind arches at the back where the three central windows opened. They are similar to the solutions adopted by Nottolini in the Palazzina of the Palazzo Ducale in Lucca.
In 1834 the building had undergone notable changes regarding the side structures. They were now T- instead of L-shaped.
In the meantime seventeen farmsteads were built for the estate farmers in 1844.
The estate is then passed from Carlo Ludovico to Duke Carlo III of Parma who in 1849 has the little church dedicated to St. Carlo Borromeo built by the architect Giuseppe Ghieri.
In this same period, two structures are joined onto the central structure and the two T-shaped wings which are raised by adding on another floor.
This information comes from the "Ufficio Tecnico Erariale" in1855, where it can be seen that neither the first floor or rooms on the third floor of the central building were finished. Here the banister on the stairs is missing as is the whitewash. As a result, it has been defined as a recent construction.
The building of the greenhouse with twelve arched entrances in the style of a loggiato also dates back to around 1850.
By 1855 work was still incomplete and even the north wing lacked interior furnishings.
In the meantime Carlo III's eldest daughter Margherita inherits the villa on the death of her father in 1854. She was the wife of Carlo VII who was pretender to the Spanish throne. They came to live here on a permanent basis after 1881. It is probable that by that time the palace's interior finishing such as the fireplace on the ground floor, the Slavonian pine doors and the tempered paintings adorning the ceilings would have been completed.
In 1885 Roberto di Borbone, second son of Carlo III decided to reconstruct the chapel following the plans of the architect Giuseppe Pardini.
In 1893 the estate is passed down to the daughter of Margherita and Carlo VII whose name was Princess Bianca of Spain. She married the archduke Leopoldo Salvatore Hapsburg Lorraine and for this reason the estate is known as archducal.
The Navy of La Spezia occupied the estate with the exception of the church in 1906 and in 1917 was put at the disposal of the needs of experimental artillery-ranges.
Furniture, houshold furnishings and art objects contained in the villa were sent to the Borbone family's new residences before the estate was given up to the Navy. It is for this reason that when Donna Bianca di Borbone came into possession of the house again in 1945, she had to redecorate and furnish the villa in keeping with its former style, even although it was much more modest than the original.
Infact, during the second world war the villa was first occupied by the Germans and then by the Americans , who during the fighting made it their headquarters.
Margherita, the third daughter of the archduchess Bianca, was the last descendant of Maria Luisa to live there. She stayed from 1949 to the its cession to an engineer called Benvenuto Barsanti in 1985 who gave it to the City Council of Viareggio to be used as a cultural house and therefore opened to all citizens.
The Town Council of Viareggio started a recovery and re-use programme in 1999 to restore it to its former glory. Restoration work is still in progress but the palace and north wing should be open for public use durino the first three months of 2003. (bibliographic source: Glauco Borella - project Comune di Viareggio))

District: Versilia
Building dating: 1822; Chapel 1848 and reconstructed in 1885
District/Location: The villa, belonging to the Town Council of Viareggio, is being restored and cannot be visited inside at the moment.
Telephone: 0584 359950
Get directions